History of the Pressure Washer

Pressure washers are pretty nifty, but where do they come from? When you think about it, they’re not just another cleaning method, right?

Whether you’re a power tool enthusiast, a new pressure washer owner, or just a random passer-by, if the title of this article caught your attention, you’re up for a treat! Let’s take a stroll down the memory lane and explore the history behind pressure washers.

Cleaning Throughout the History

Even though pin-pointing such a discovery to an exact date is outright impossible, it can be safely assumed that for millennia, mankind has traversed the face of this planet with the knowledge that some stains are best scrubbed off dry, and vice versa, others by applying water. It is unlikely that other solvents, such as alcohol, were used for cleaning until recently, as their abundance in nature is pretty low. On top of that when, alcohol was discovered, it can be safely assumed it was manufactured for purposes other than cleaning.

However, that is not the case for detergents. A quick Google search will tell you that the most basic of detergents, soaps, were manufactured in the Middle East, around 2800 BC, in Babylon (opens in a new tab). The basic formula of soap has remained pretty consistent over the years, the main ingredient being alkaline salts of fatty acids, which can be produced by a simple neutralization reaction (you can even make your own soap at home!). The source of fatty acids will differ from formula to formula, but in principle, any fat or oil will do.

Therefore, throughout human history, it has been the standard to simply clean stains by scrubbing them, occasionally with water, and if available, even by applying soap. This method was all fine and dandy, until one day, the world changed forever, and so had the stains. It was the industrial age. 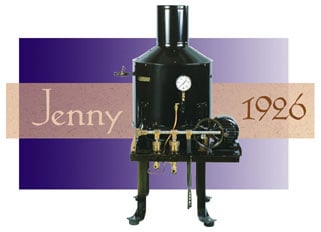 The industrial age brought about both new inventions and new challenges. Most importantly, it gave rise to pollution. Though the media and activists have all but limited pollution to air only, the old-timers didn’t think twice about that. Their minds were preoccupied with burnt gunk, oil residue, you name it… the stuff they actually had to clean.

And so, for years, people simply scrubbed, for hours at end, until one man changed the rules forever. It all happened during the roaring ’20s, at the height of the prohibition. Frank W. Ofeldt II (opens in a new tab), as many other skilled engineers, was making a good living building moonshine stills in his garage. And as most engineering processes, it left an awful lot of greasy mess around.

But Ofeldt was an engineer, and an inventive one at that. To make his job easier, he modified one of his stills (opens in a new tab) to boil water and run the steam under somewhat high pressure through a narrow tube. Miraculously, it worked!

However, the idea needed some reworking. A proper pump and a better delivery system. Upon finding an investor in his idea, in the Homestead Valve Company (opens in a new tab), Frederick E. Schuchman Sr., the hot pressure washer, or more strictly speaking a steam washer as we know it today, was invented. Shortly after, it reached the public under the name High Pressure Jenny, for marketing purposes Hypressure Jenny, which better fit on brochures and posters. Their parent company, Steam Jenny (opens in a new tab), still exists to this day.

Steam Jennies became popular fast, as they worked miracles for chemical, engineering, and other manufacturing plants. They were also a great tool for any carwash or mechanic. However, they had their limits – namely their pump technology. Both size, and pressure, but also their price, rendered them a professional investment, rather than a household tool.

Steam Jennies started off on a solid footing, using displacement triplex pumps (opens in a new tab), which is a technology still used to this day for steam. Naturally, the pumps of the 1930s would have a hard time competing with the contemporary pumps.

While it is hard to track the small changes in Steam Jenny’s pressure washer technology, as both their devices and their brochures disappeared in the annals of history, we have done our best to piece together a modest gallery to give you an idea of what early Hypressure Jenny looked like. 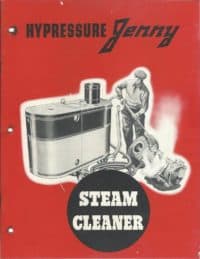 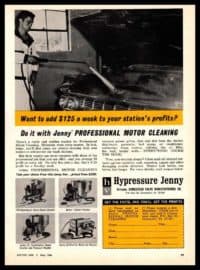 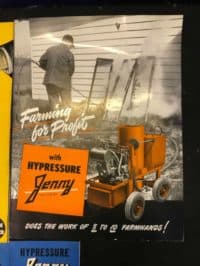 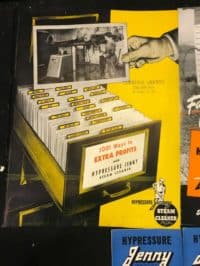 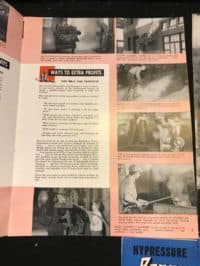 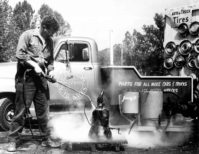 The Old Continent Enters the Game

The next “big” innovation came from a very different part of the world. Alfred Kärcher and his already established Kärcher company (opens in a new tab), which notably invented caterpillar tubes and hot air blowers, particularly favored by the German Lufthansa. 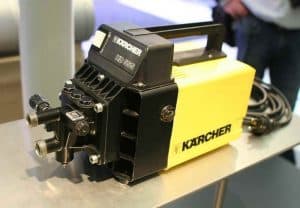 In 1950, Kärcher took up the challenge to reinvent the steam washer into what is often deemed the first “true” pressure washer, dubbed DS 350, though it is unclear what exact improvements were made to justify the claims of it being a new invention.

What can be said in certain is that Kärcher very quickly grasped the hold of the pressure washer industry, and solidified their dominance in 1984, by inventing the first portable pressure washer, the HD 555, which weighed “only” 33 lbs (15 kg) and was the first device that reached actual households, rather than just the professional clients. Alfred Kärcher himself never lived to see the success of his company, as he already died in 1958, yet his company and his legacy lives on to this day.

As we have already alluded, the real changes in pressure washer technology happened on the inside – the pump. According to some sources (opens in a new tab), the true leader of the pressure washer industry were the pump manufacturers themselves. Namely, CAT Pumps (opens in a new tab), which upgraded the industry standard from piston pumps to ceramic pumps and stainless-steel plunger pumps.

These improvements allowed for smaller, more powerful devices, switching from hot to cold water, and applying detergents. And so, the modern pressure washer was born.

In the following decades, more companies and with them, many more pressure washer designs were introduced to the market. Portable pressure washers became affordable to households of all incomes. Pump designs improved, leading to the currently used pump technologies, which will be discussed in detail in a future, dedicated, article.

And just like that, our journey ends. Stay tuned to find out what comes next.

Manager & Editor of pressurewasherdb.com. Mechanical Engineer by trade, he specializes in power tool design and works for a global player in the OPE industry. 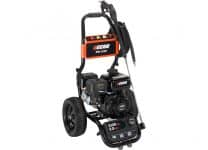 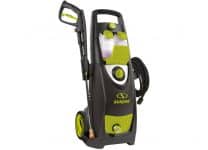