The Kärcher K1700 is an electric pressure washer offering a maximum water pressure of 1700 PSI and flow of 1.2 GPM. (Read full specs)

-No User ReviewsWrite a review
CompareShortlistShortlistedRemoved from shortlist 3 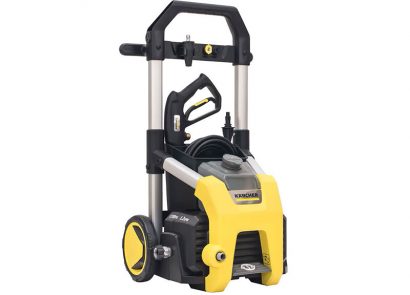 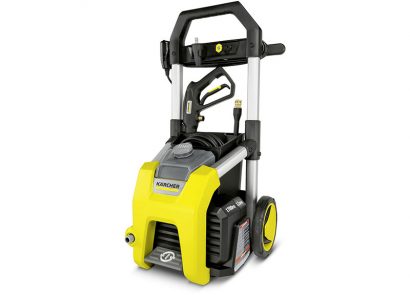 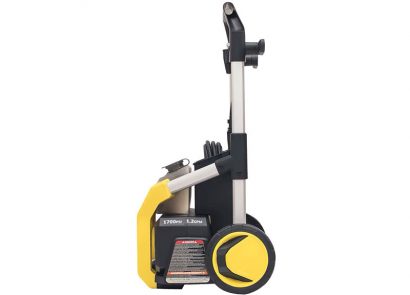 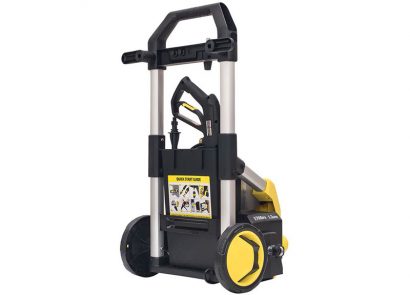 The K1700 was developed to offer high cleaning performance and unparalleled ease of use. This electric pressure washer delivers 1700 PSI of TruPressure™, ensuring you get the highest level of cleaning power and driven by a reliable universal motor. It includes convenience features such as a unique on/off foot switch, a handy storage bin, large one-half gallon removable detergent tank and three spray nozzles (including a turbo nozzle for intense cleaning). It is perfect for tackling typical outdoor cleaning jobs. (source: Kärcher (opens in a new tab))

The Kärcher K1700 is a light duty pressure washer, and enables:

Ahead are presented its power characteristics and design, its main features and any other additional features.

With a 14 amp universal motor, its axial pump delivers a pressure of 1700 PSI (roughly 28 times more than a standard garden hose) and a flow of up to 1.2 GPM (values claimed by the manufacturer), resulting in the Kärcher K1700's cleaning power of 2040 Cleaning Units.

Kärcher made starting the motor of this electric pressure washer as easy as possible, since the K1700 gets easily started by stepping on an ON/OFF pedal. The unit is ready-to-use with peace of mind, thanks to the included 35 ft GFCI cord.

The Kärcher K1700 is very mobile, due to its hand truck design and approximate dimensions of D17.3 x W16.5 x H33 in. The aluminum frame ensures the device's durability, as it will not rust. The handle adds to the K1700 convenience of transport.

Since the unit weighs only 20.7 lbs, it is very easily carried around. This is, in part, thanks to its aluminum frame, which allows it to remain as lightweight as possible. As if this lightweight wasn't enough, the device also features two 8" wheels to further improve its ease of use and of transport.

Along with the Kärcher K1700 itself, the package also includes a spray gun, a wand, a pressure hose, 3 nozzles and a detergent injection feature, which are discussed in further detail below.

Note: The shape of the nozzles above is for illustration purposes only and may differ.
Red cross: Not recommended. Green check: Suitable. Orange check: Use with caution. 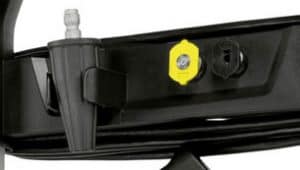 The Kärcher K1700's performance versus other pressure washers

The following charts are provided to give you an idea of how the key specs of the Kärcher K1700 compare to similarly priced pressure washers.

Here's a list of the most popular specific comparisons:

As you can see from this interactive chart, when compared to other electric washers between 2000 and 2500 Cleaning Units, the Karcher K1700 is on the average side of the price range.

Therefore, this pressure washer nicely fits in the expected budget for this kind of cleaning power.

Do you own the Kärcher K1700 and agree (or disagree) with these strengths and weaknesses?

Let us know and write your own review.

Unlike many websites, we did our best to research each of the specs above. That being said, we are not immune to making the occasional mistake or omission. Should you notice any missing or incorrect values, don't hesitate to suggest improvements so we can address the issue.

Founded in 1935 by Alfred Kärcher, this family-owned business is headquartered in Winnenden, Germany. Credited with developing Europe's first hot water high-pressure washer in 1950, the company continues to pride itself on ingenuity and innovative thinking for new solutions in the cleaning industry. Kärcher also insists on being a socially- and ecologically-sustainable company. The popularity of the brand can be seen by the fact that the name Kärcher has in some European countries become a colloquial term used synonymously with pressure washers.

The Kärcher K1700 is covered under a warranty for up to 3 years. This warranty may be limited and may not cover all parts of the unit.
For more information about the warranty of Kärcher pressure washers, please contact the Kärcher Customer Support: 1-800-537-4129.

In:
We would love to know your opinion